BUSINESS OF THE WEEK 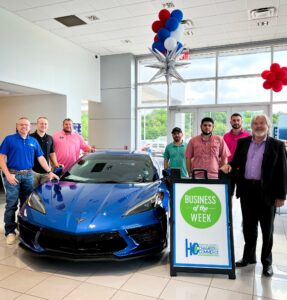 This Week’s Business of the Week is Jay Hodge Chevrolet of Sulphur Springs!  They provide new and used vehicles to fit almost any budget, as well as financing on parts, service and tires on most models. They also buy vehicles and are an authorized Kelly Blue Book Instant Cash Offer redemption center.
Here’s a little backstory for you… Jay Hodge started working in the automotive business for his grandfather, James Hodge, in Paris, Texas. He now owns that dealership, along with Jay Hodge Chrysler Dodge Jeep Ram of Paris and Hugo, Oklahoma and Jay Hodge Chevrolet of Muskogee, Oklahoma. General Manager Bill Owens told us that opening the Sulphur Springs dealership was a dream of his, James’ and Jay’s, and it took great effort and time to turn that into a reality! After long building delays, Jay Hodge Chevrolet of Sulphur Springs opened in the last week of December 2015.
Since opening their local doors, they have won the prestigious General Motors Mark of Excellence Award every year. They were the Hopkins County Chamber’s Large Business of the Year in 2018, and they have received numerous recognitions in Sulphur Springs News Telegram’s “Best of Hopkins County” Community Awards, across all automotive categories. We just couldn’t go without mentioning their impressive achievements!!!
Share on Facebook Share
Share on TwitterTweet
Share on LinkedIn Share
Send email Mail
Print Print